So I get a message regarding changes needed to Sensor Framework and QtSensors to add heart rate sensor support for AsteroidOS. AsteroidOS is an open source operating system for watches. It uses OpenEmbedded and Yocto to build the system image and kernel that you can flash to a small group of Android watches. The UI is based on Qt and Qml.

I thought about it for approximately 30 seconds and I bought a used LG Urbane watch. Which is listed on the Install documentation for the OS, as one of the watches that can run AsteroidOS. I choose LG, as I am partial to their Smart TV's, which happen to run Qt and QML.

First issue I ran into was that adb did not see the watch on WearOS, even in developer mode, but once I changed the usb cable to a good, solid cable (actually is an old Nokia cable that still works like new!), I was then able to flash the pre-built AsteroidOS 'nightly' build image on it. You might want to backup the image on the watch before you do, unlike what I did. First flash resulted in a boot loop, so I flashed the image again, and this one booted! 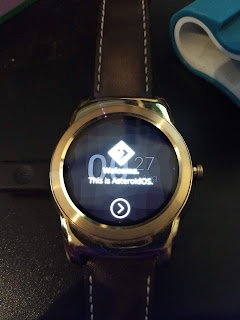 In order to test new sensors code, I need to build the thing. Essentially, it was simply to git clone the repo, run a script, and build the image. Too easy! Luckily I have a fast development machine and it did not take too long to complete.
Again I had to flash it two times. As long as I can get into the fastboot screen, everything is ok.

WearOS has a wrist gesture sensor, which in WearOS, turns on the display when the user flicks their wrist. iOS does this as well. AsteroidOS does not yet have support for utilizing this, so that is one of the first things I would like to fix. Neither QtSensors or Sensor Framework has support for this sensor yet. Since it is open source and I am familiar with sensor API's that run on it, I can fix this on my own!

Qt for WebAssembly is an exciting new platform for Qt. It means that Qt applications can run in a web browser. This means that deploying a Qt application is as easy as copying the files to your properly configured web server and handing out the url, for your users to run in their web browser.

QtMqtt has been ported to run on the WebAssembly platform, using QtWebSockets as it's transport. There is a catch to getting it working, however. That catch is that you need to use the WebSocketIODevice class that is in the QtMqtt websocketsubscription example app. WebSocketIODevice depends on the QtWebSocket module.

In a nutshell, at a minimum,  code such as this:

Then you can use the QMqttClient as normal.

You can read more about Qt for WebAssembly, QtMqtt and QtWebSockets in the book Hands-On Mobile and Embedded Development with Qt 5
Posted by deviceguy at 1:29 PM 2 comments: