Qt on RaspberryPi is really easy, but can be rather time consuming to build an image to run on raspberry pi with Qt 5. You can either do it up yourself manually grabbing the sources, tool chains, etc. You could also buy the Qt for device creation package which comes with great support, bells, whistles and commercial licensing, or build it yourself and use open source GPL licensing. To get started using the open sourced parts, you clone one git repo:
git clone git://code.qt.io/yocto/meta-boot2qt.git

You then need to decide which device to target. I have a fancy new raspberry pi 4 hooked up to a touch screen, so I will choose that.

To get a list of the Boot2Qt targets run the command:

To initialize the build environment for a raspberry pi:

This will clone needed repo's.

You will then need to set up the environment specifically for your device by setting MACHINE
and then source the setup-environment.sh script:

Now, if you just want an image to run:

Sit back, enjoy a cuppa and a pizza on this fine day... Don't let the computer sleep, or you will kick yourself in a few hours when you check on the progress. My final image to be dd'd onto the sd card was found in

This is what you will be presented with when you boot your device: 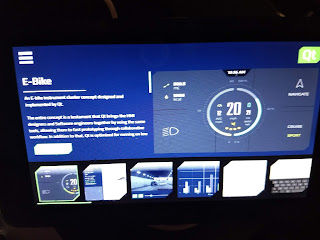 To build the sdk/sysroot the command would be:

You can build other targets including qemu, which will give you an image that runs in the qemu emulator.

You can then also set up target kits in Qt Creator to target the raspberry pi, set up the device kit so you can run and debug on the device. More fun for all that time on your hands right now!

I write about creating device OS images using Qt's Boot To Qt and Bitbake for the Raspeberry Pi in my book, Hands-On Mobile and Embedded Development with Qt 5

Do you have any prebuilt boot2qt image for pi 4 please? I have tried building it myself but the builds just fail.

I second that, some dependencies cannot be found for v5.15.x, and build fails for newest 6.x